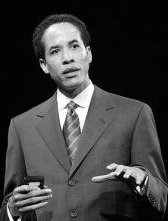 Charles E. Phillips, Jr. is the President of Oracle Corporation and a member of the company's Board of Directors since January 2004.

Prior to joining Oracle, Mr. Phillips was with Morgan Stanley & Co. Incorporated, a global investment bank, where he was a Managing Director from November 1995 to May 2003 and a Principal from December 1994 to November 1995. From 1986 to 1994, Mr. Phillips worked at various investment banking firms on Wall Street. Prior to that, Mr. Phillips served as a Captain in the United States Marine Corps as an information technology officer (captain). Mr. Phillips holds a BS in Computer Science from the United States Air Force Academy, an MBA from Hampton University, and a JD from New York Law School and is a member of the bar in Washington D.C. and Georgia. Mr. Phillips is on the boards of Viacom Corporation, Jazz at Lincoln Center in New York City, New York Law School, Viacom Inc. and Morgan Stanley.