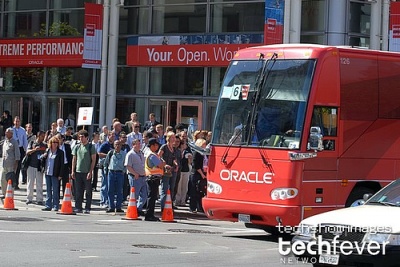 Oracle OpenWorld 2008 attendees on their way to the next session.

Oracle OpenWorld (OOW) is an annual Oracle conference event for business decision-makers, IT management, and line of business end users. It is held in major cities around the world, with its main conference being held in the USA (normally close to Oracle's HQ).

The Oracle OpenWorld 2008 conference was held from 21 to 25 September in the Moscone Centre, San Francisco, California, USA.

The 2007 conference, for the first time, featured an unconference. An unconference is a conference organized, structured and led by the people attending it. Instead of passive listening, all attendees are encouraged to present and ask questions.

Almost 500 Oracle users gathered in San Francisco in 1986 for the first International Oracle Users Week (IOUW) conference. IOUW attendance continued to grow throughout the years. Oracle saw this as an opportunity to create even more marketing sessions to further increase growth. In 1996 Oracle announced that starting in 1997, it would take control of the user conference and call it Oracle OpenWorld.